At Salona we go for the best, and we go there for you

The best racers on the market

Passion and devotion for building performance cruiser yacht that would match racing performance of the best racers on the market, as well as provide comfortable cruising abilities was a goal back in 2002., when all started. We find a winning formula, a perfect combination of performance, comfort and safety, crucial for relaxed and joyful living on board.

Croatian shipbuilding tradition that goes back to Ancient time when Salona (Solin) had been the coastal stronghold and the port of the Illyrian Delmats, enables Salona Yachts to achieve know-how in design, project management and skilled labour force. Therefore, technological level of boat building in Salona yard is a logical consequence.

Over time, our experience and understanding of our customers’ requirements has grown, leading our workforce to improved production technology and continued development in both the look and functionality of our boats. We have aimed for the top in quality, design and winning performance. Each Salona boat is built with individual attention to its new owner to become a personal statement.

Over the years Salona boats won many regattas around the world proving that Salona can win the toughest regattas and at the same time remain the comfort that is required for family cruising. The ability to sail fast comes hand in hand with perfect maneuverability and to stand against demanding weather conditions. All our models are easy to handle with less crew necessary to fully control the yacht, even in the toughest situations. The reason of such performance in this field lies in the strong and uncompromised construction of our yachts. 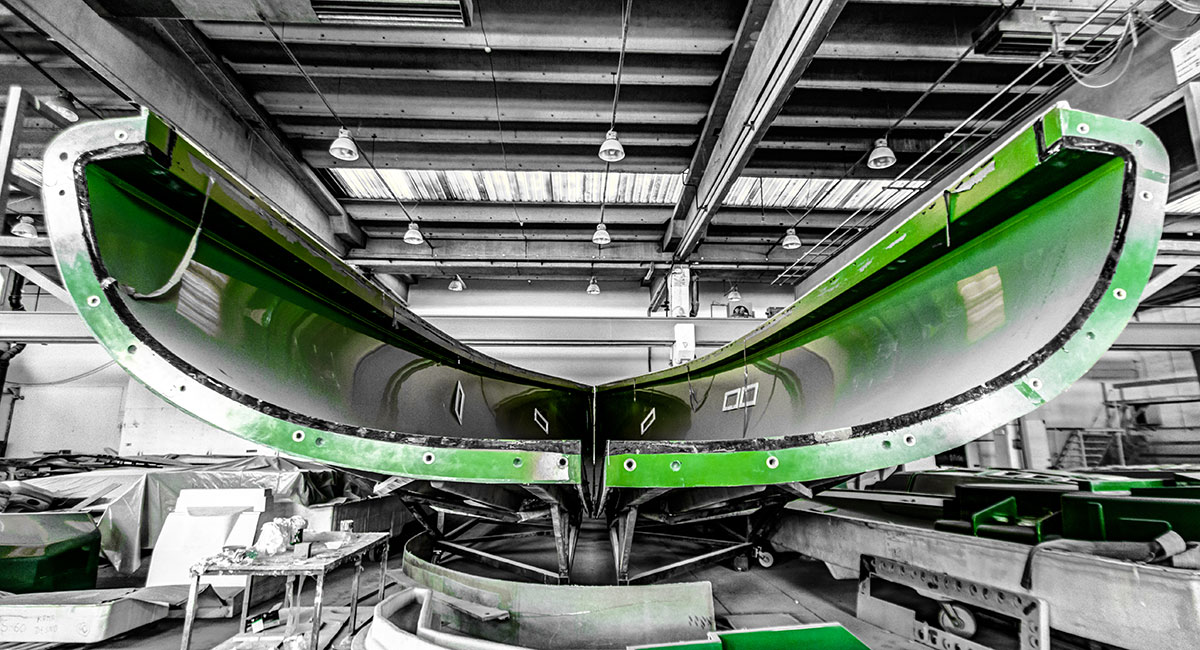 From the very beginning, Salona Shipyard was dedicated to getting every detail right, aiming for perfection. Now we are proud of our uncompromising approach towards quality and product safety. All our boats are built in accordance with Ocean A Category and are certified by DNV - GL.

Strong and light construction is a consequence of the advanced building techniques, such as vacuum infusion of the hulls and decks, used for many years. Modern building materials varying from multi - axial glass to carbon fibers combined with advance resins make our yachts an example of uncompromised construction quality.

In addition, all our models have been reinforced with stainless steel frame structure (the grid forms the structural spine of the boat) which supports the keel, mast and shrouds, giving our boats an extremely strong but light construction.

Technology itself doesn’t make the yacht a great one, it’s the team of experienced employees that create your dream yacht.

The remains of the ancient City of Salona

The remains of the ancient City of Salona, the most important city in the ancient world, are located six kilometres north of Split. Salona’s favourable geographical position in the middle of the Eastern Adriatic Coast and its location within the well-protected Kastela Bay, along the delta of the river Salon (present Jadro) as well as good road connections, presented a precondition for fast and smooth development of this incredibly inspiring city, the metropolis of the Roman Province of Dalmatia.

Salona was initially a coastal stronghold and a port of the Illyrian Delmati. Furthermore, this port located in the eastern wing of the protected bay was a great impetus for the development of the city. The development was caused primarily by trade activities, and then, especially in the late centuries, by the change in people, worldviews, religious teachings, construction, shipbuilding, and other skills.

Today, Salona, materially speaking, is a pile of scattered and disposed remnants giving us just an idea of its former size, strength, extraordinary power and culture. Thus, a broken part of the letter, more precisely the serif of the initial letter “S” from the “SALONA” inscription, symbolizes today’s Salona and its remnants. But even more, it symbolizes the former mighty Salona. All of this is exactly what the serif through monumental capital represents. When the broken piece of the letter breaks off as shown in our logo, it resembles a sailboat and refers to the ancient shipbuilding tradition that the people of this area have been dealing with since the ancient times. Overall quality is not enough if you cannot find it in small details. Our interiors are ‘born’ in Catia 3D modeling software, passing extended tests before being implemented and assembled with care to create a product that will make both the owner and the builder proud.

The production process has been optimized for quality control, allowing each yacht to be inspected through every production phase. After the yacht leave the production site, our team of experts is at your service at all times.

The yacht equipment is made by world leading companies, perfectly matching the Salona style. Furthermore, our after sales network is active on five continents, meaning that Salona owner will never be alone.